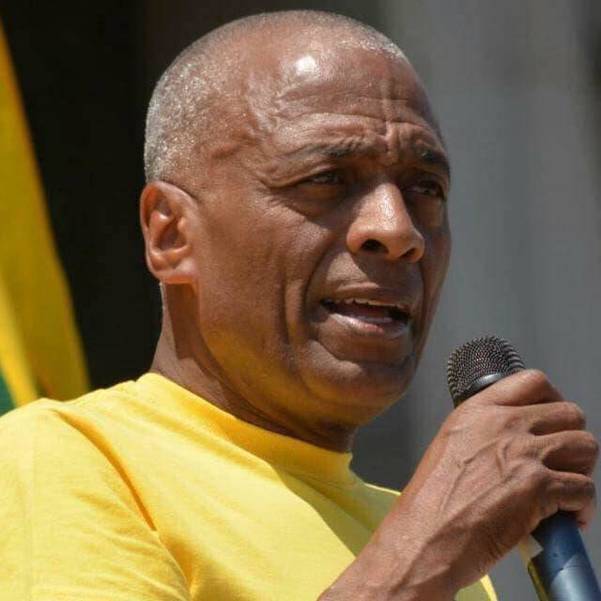 Hamm is the Type of Leadership that Paterson Needs

Dear Editor, I have been introduced to an emerging force in the U.S. Senate race. His name is Lawrence Hamm, a refreshing, seasoned, humble candidate who is championing an important agenda for urban communities in New Jersey.

As a lifelong Paterson resident, community activist, educator, homeowner, husband, and parent, I benefit from his significant contribution by his assistance of many residents throughout this state. His organizational skills have effectively contributed to the wellbeing of others through policies and laws and increase the awareness of the large gap of injustice for the black and brown communities. 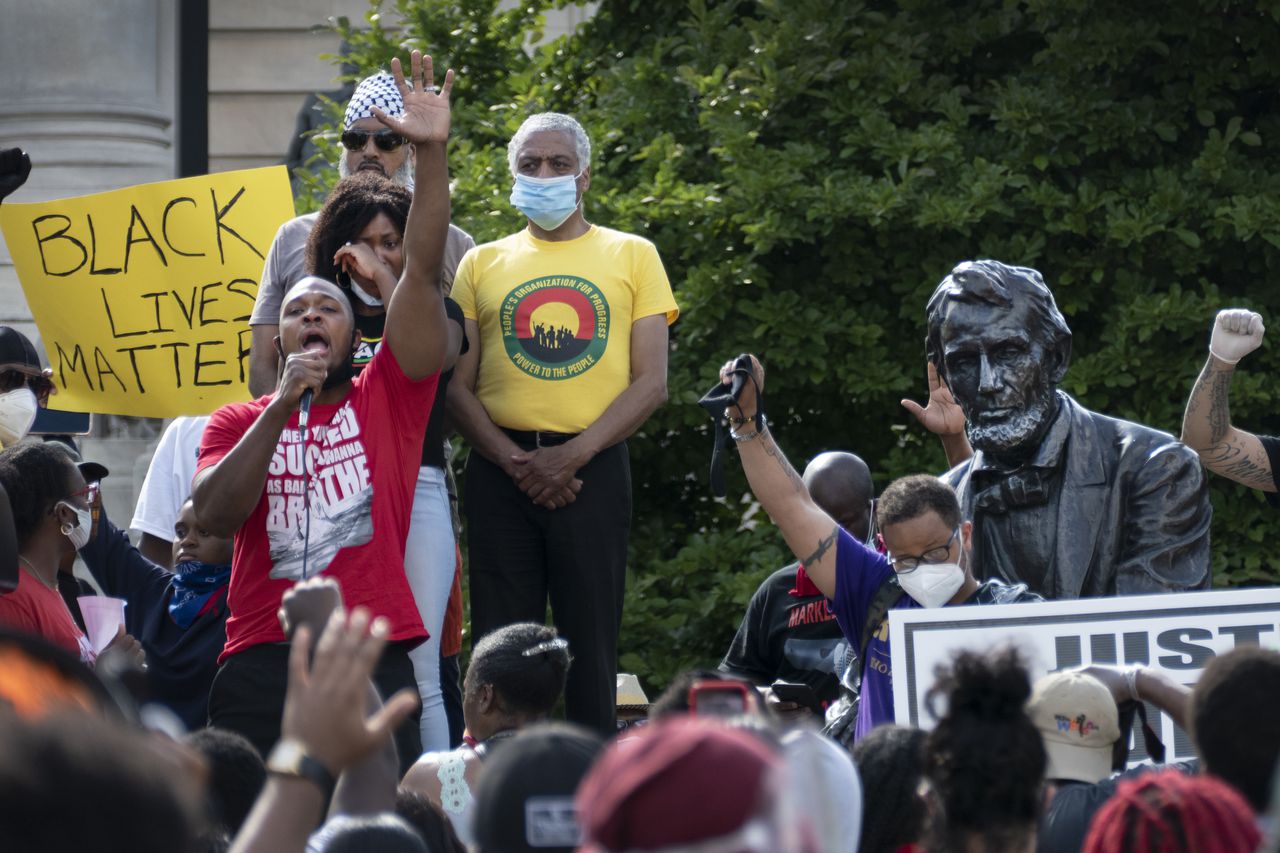 “We didn’t want it to make it look like we’re using the death of Floyd to advance something else,” Hamm, 66, told NJ Advance Media. “We were there because of the tragedy and to demand an end to police brutality so these things won’t continue to happen.” 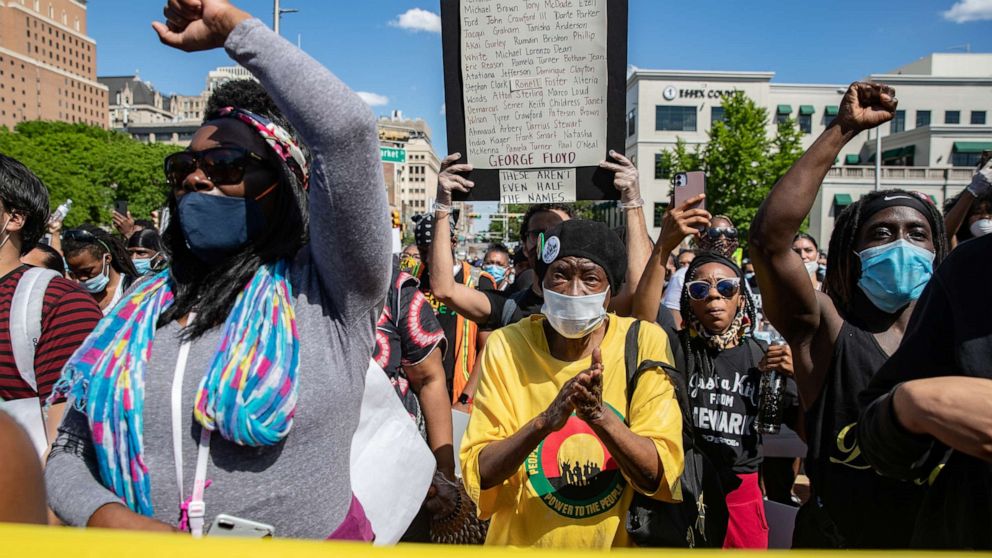 Peaceful protests for George Floyd prevail in New Jersey, despite history of racial tensions with police

For the past week, tens of thousands of protesters have taken to the streets -- in the U.S. and all over the world -- to voice their anger over the tragic death of George Floyd, a black man who died in police custody with a white officer's knee on his neck.

"I don't know if 'peaceful' is really the right word," Hamm said. "People say 'peaceful protest,' but a protest is a disturbance of the peace." "If I had to boil it down to one factor," he added, "I would say that one of the reasons that the protest has not been destructive is because people want to keep the narrative about the protest, on the issues of justice. 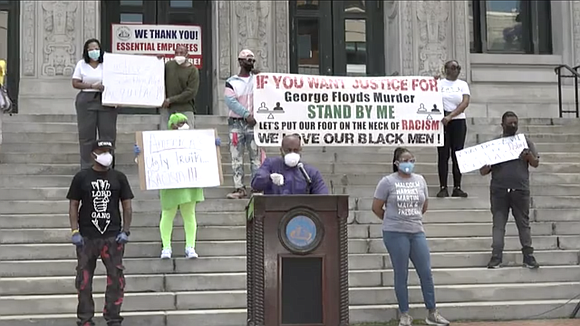 Thousands of people took to the streets of Newark on Saturday to protest the recent police killing of George Floyd. The protesters were organized by activist group the People’s Organization for Progress (P .O.P .).

“We will never stop marching or speaking for those killed by racialized terror. We will not be quiet,” said Hamm. “We will not be silent. We will continue to wage resistance against this systemic racism and its tool of violence. Here on the streets of Newark, in the halls of justice, and the floors of legislatures, we will stand up and speak out.”

An activist who remembers Newark’s 1967 uprising explains how the city has avoided violence this time. 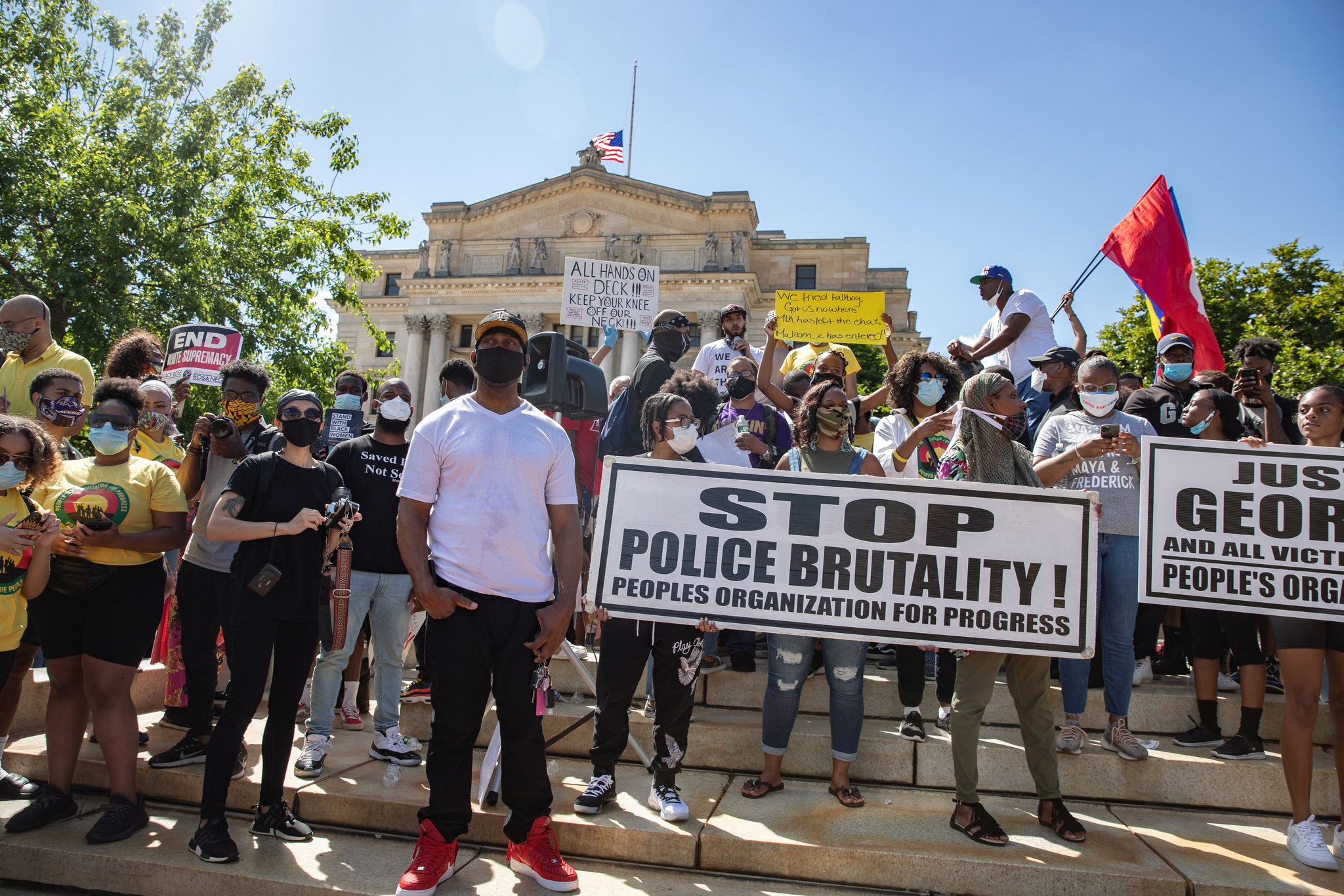 A weekend protest in Newark ended at the same intersection where one of the most wrenching and deadly of the race riots that convulsed the nation during the 1960s began. It was there, just outside the First Precinct at the corner of 17th Avenue and Livingston Street, that hundreds of protesters outraged by the death of George Floyd faced off late Saturday against officers in riot gear.

“People have a right to be outraged,” said Lawrence Hamm, a Democratic candidate for United States Senate and the chairman of the People’s Organization for Progress, which organized the protest. “I would even say that it is unhealthy for people to repress their strong emotions.” 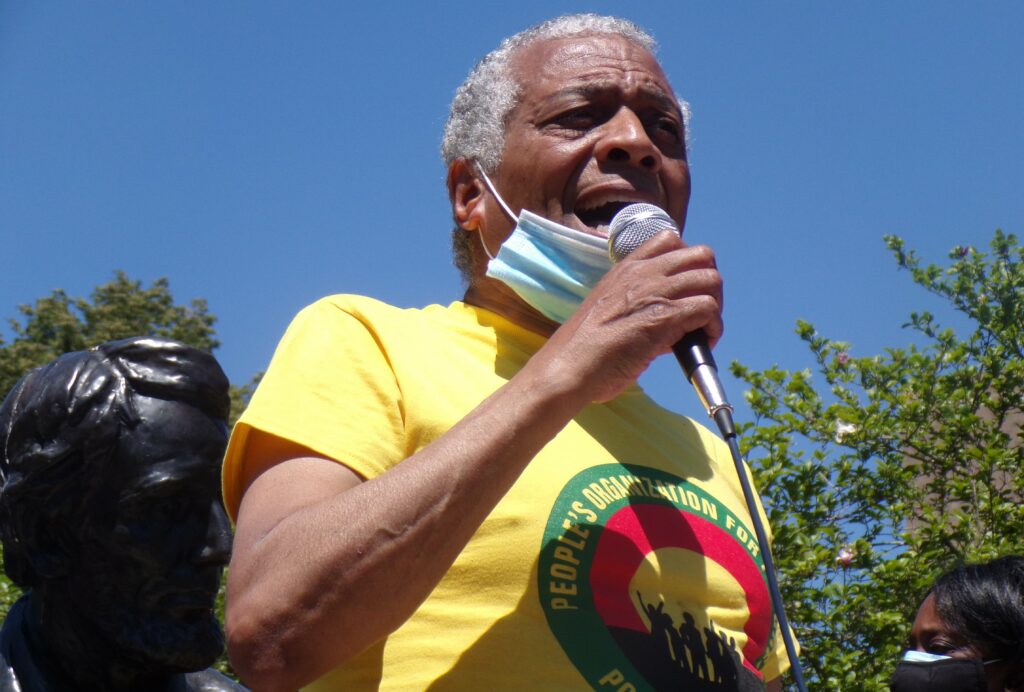 ‘A fight for our life.’ – George Floyd’s death sparks protests in Newark

Hundreds gathered in solidarity Saturday in Newark to denounce the death of George Floyd in Minneapolis, whose death while in police custody has sparked protests against police brutality across the nation. Video of Floyd’s arrest has been widely seen. The 46-year-old black man was handcuffed and face down while a white police officer had him pinned down by his neck for about eight minutes. Four officers were fired over the incident, and one, Derek Chauvin, was charged with murder and manslaughter.

"When the day is through, the account written of our gathering today will be one that we can be proud of. Power to the people," 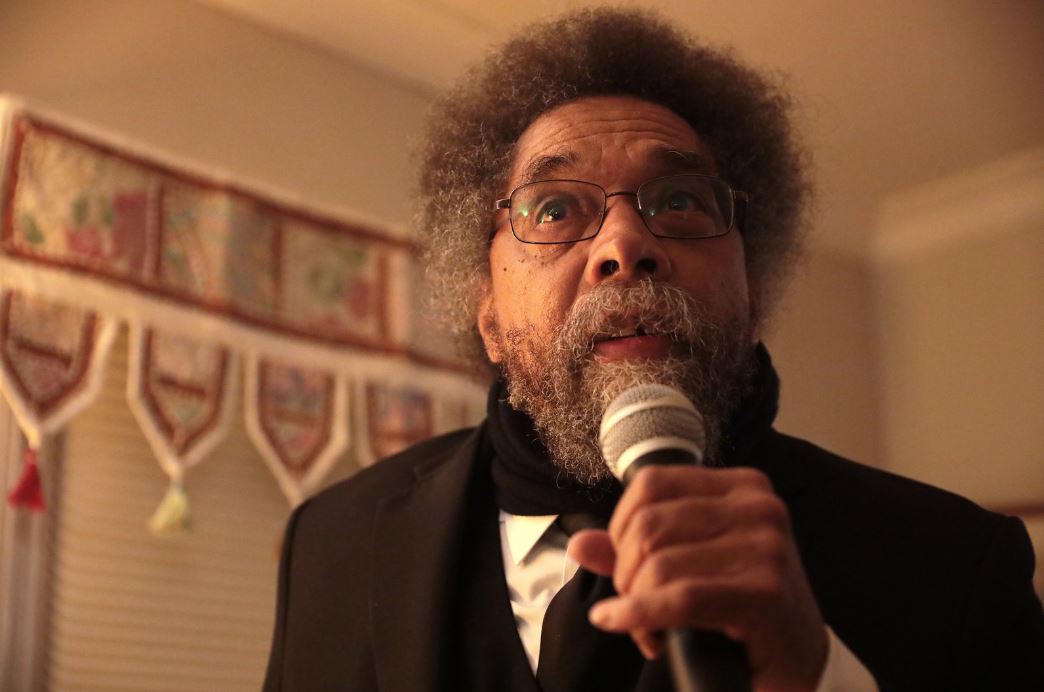 “I endorse Lawrence Hamm for Senate in New Jersey with the belief that he is [the] very idea of the re imagining of this country we both love,” West said. “Brother Hamm will take the people onto the floor of the Senate and demand this country live up to the very premise of democracy and justice for all.” 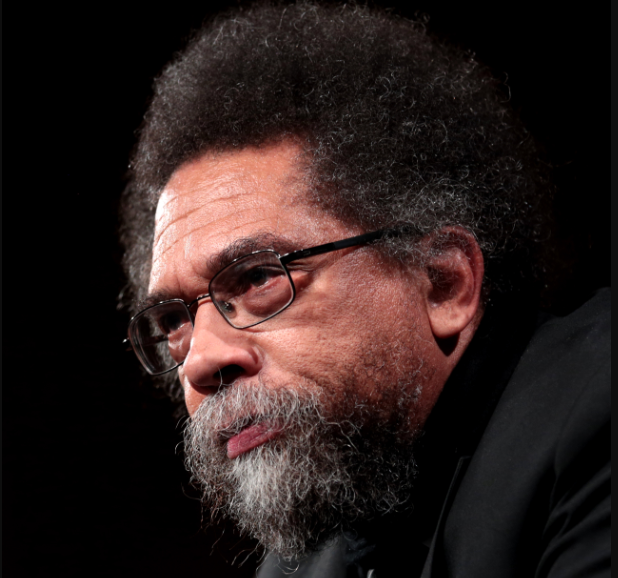 “I am humbled and encouraged by this recent endorsement from Dr. Cornel West. He is a friend, a brother and a compatriot. His support deepens our stride, quickens our pace, and strengthens our resolve as we move ever forward.” 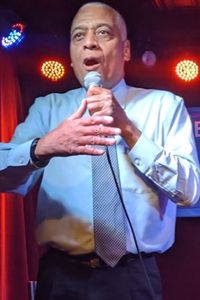 Longtime civil rights activist Larry Hamm announced that he will challenge Sen. Cory Booker for his Senate seat in this year’s Democratic primary. “The time for tinkering around at the edges is over,” says Hamm.

“I would be a better senator because I’m going to advance an agenda that actually helps working people and poor people and the middle class,” says Hamm. “Sen. Booker has not done it as aggressively as is needed.” 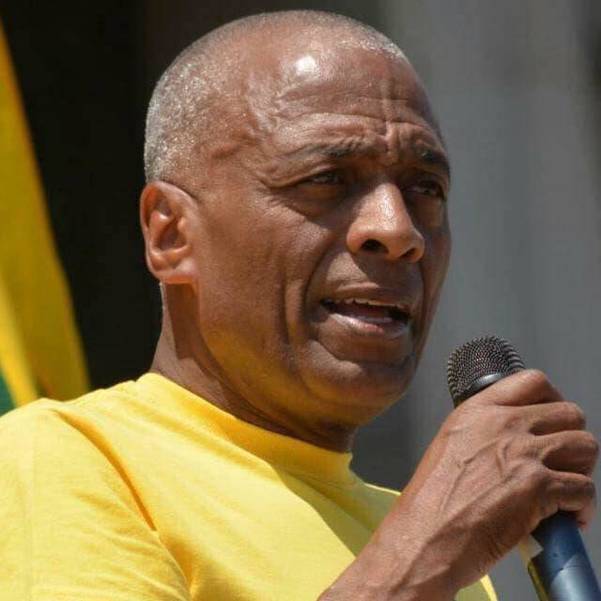 The 65-year-old Montclair resident has devoted his life's work to activism and announced via social media on Thursday that he will challenge Cory Booker in the 2020 Democratic primary for U.S. Senate and host a campaign meeting on Sunday, December 22.

"I am planning to run as a candidate for US Senate in 2020. If you are interested in supporting or volunteering for this effort then I invite you to attend a meeting to discuss my campaign this Sunday, December 22nd, 3pm at REFAL, 271 So. 9th St in Newark, NJ. (Corner of So. 9th St. & 13th Av.)," he wrote. 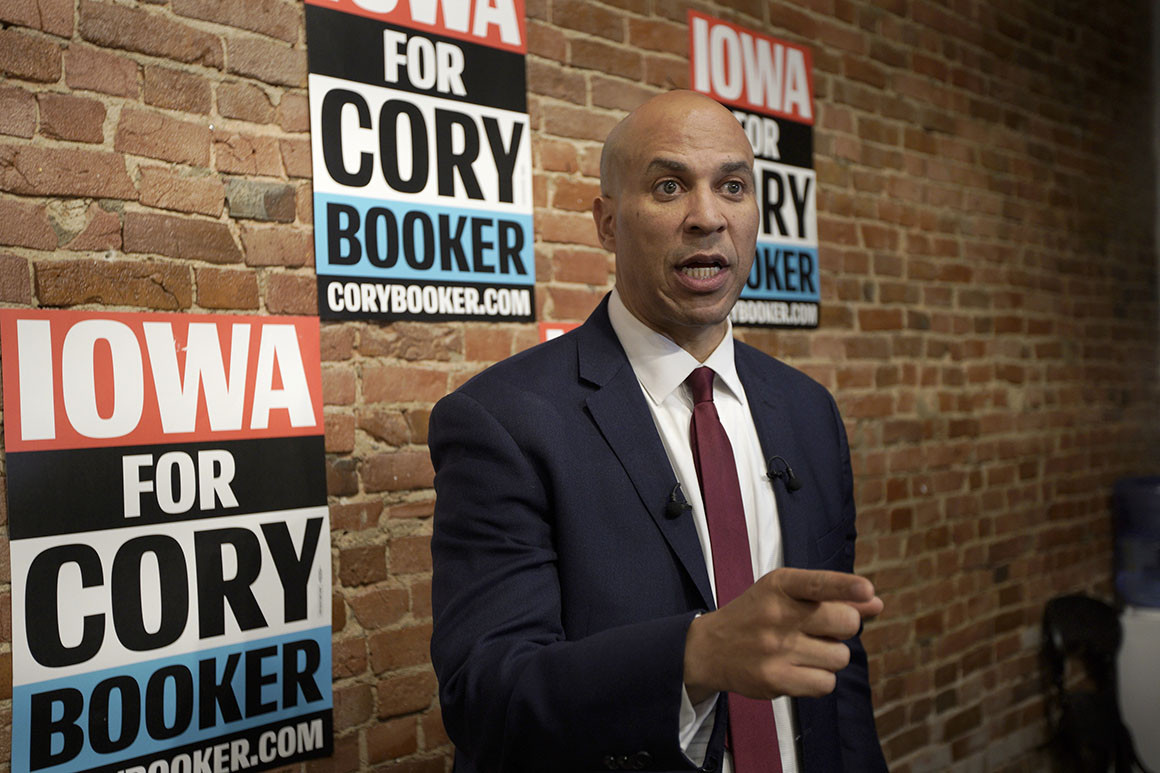 Booker getting primary challenge for Senate from Sanders supporter

Cory Booker will have at least one Democratic primary challenger next year for his Senate seat if his presidential campaign doesn’t take off — a Bernie Sanders supporter from his hometown. Lawrence Hamm, a longtime Newark civil rights activist who chairs the People’s Organization for Progress, said Thursday he plans to run for U.S. Senate in the 2020 Democratic primary.

"I support Bernie Sanders for president because I believe in the agenda and the platform that he’s running on," said Hamm, who is the New Jersey chairman for Sanders’ campaign. "And if Bernie Sanders becomes president, he’s going to need a senator from New Jersey who will fight wholeheartedly for those reforms and agenda items and platforms that he campaigned for as president."

It’s time to treat structural racism with the urgency it deserves. In order to transform this country into a nation that affirms the value of its people of color, we must address the five central types of violence waged against black, brown and indigenous Americans: physical, political, legal, economic and environmental.

Government-sanctioned enslavement of Africans for the exploitation of free labor from 1619-1865, was the early economic engine of America and benefited wealthy white planters, banks, corporations, and society until now.

At a time when millions of Americans are working two or three jobs to feed their families, the three wealthiest people in this country own more wealth than the bottom half of the American people. Over the last 30 years, the top 1% has seen a $21 trillion increase in its wealth, while the bottom half of American society has actually lost $900 billion in wealth. In other words, there has been a massive transfer of wealth from those who have too little to those who have too much. For the sake of our democracy and working families all over America who are struggling economically, that has got to change. In order to reduce the outrageous level of inequality that exists in America today and to rebuild the disappearing middle class, the time has come for the United States to establish an annual tax on the extreme wealth of the top 0.1% of U.S. households. This wealth tax would only apply to net worth of over $32 million and would raise an estimated $4.35 trillion over the next decade. Anyone who has a net worth of less than $32 million would not see their taxes go up at all under this plan. The revenue raised under this plan would be used to fund an affordable housing plan, universal childcare and would help fund Medicare for All.

Yes, we can live in a country where every senior lives in dignity and security, and does not have to choose between paying for basic necessities like medicine, food, or housing. We will do this by guaranteeing every American the right to a secure retirement, the opportunity to age in place in the community, and by expanding and improving Medicare to include dental, hearing and vision care.

We have seen what happens when corporations and billionaires control our system of government to protect their own profit and greed. The era of Wall Street billionaires controlling our government and elections must come to an end, and we must take back our democracy for the American people. Every American, regardless of income and race, must have the freedom to exercise their constitutional right to vote.

Today, more than 30 million Americans still don’t have health insurance and even more are underinsured. Even for those with insurance, costs are so high that medical bills are the number one cause of bankruptcy in the United States. Incredibly, we spend significantly more of our national GDP on this inadequate health care system—far more per person than any other major country. And despite doing so, Americans have worse health outcomes and a higher infant mortality rate than countries that spend much less on health care. Our people deserve better.We should be spending money on doctors, nurses, mental health specialists, dentists, and other professionals who provide services to people and improve their lives. We must invest in the development of new drugs and technologies that cure disease and alleviate pain—not wasting hundreds of billions of dollars a year on profiteering, huge executive compensation packages, and outrageous administrative costs. The giant pharmaceutical and health insurance lobbies have spent billions of dollars over the past decades to ensure that their profits come before the health of the American people. We must defeat them, together. That means joining every other major country on Earth and guaranteeing health care to all people as a right, not a privilege, through a Medicare-for-all, single-payer program.

a fight for criminal justice,
reparations and all of us.
‍
join the movement today.

To contribute via personal check, please make checks payable to “Committee To Elect Lawrence Hamm" and send to: